The Legend of Pele

Pele, the legendary goddess of fire and volcanoes, is the daughter of Wākea, the Sky Father, and Papa (Haumea), the Earth Mother.

Pele is a creator of mountains and islands, including the Hawaiian Islands. She is also a destroyer and a burner of lands. Pele is able to assume different forms, and said to be akua kino lau “...because of her ability to change into a child, a beautiful maiden, a plain matron, or a very old woman.” 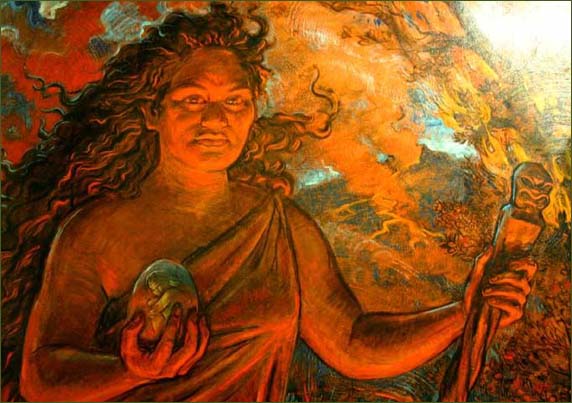 According to legend, Pele protects her sacred fires today in Halema‘uma‘u Crater at the summit of Kīlauea Volcano on Hawai‘i Island. Halema‘uma‘u means “House surrounded by the ‘ama‘u fern,” referring to the ferns that surround the volcanic crater. These ferns are said to be the embodiment of the demi-god Kamapua‘a, who pursued Pele’s love but was rejected.

The battle between Pele and her sister continues today on Hawai‘i Island’s southeast coast where the lava meets the sea in fiery explosions.

In ancient Hawai‘i, the fruiting branches of the native ‘ōhelo were thrown into Kīlauea Volcano as an offering to Pele. Another plant considered sacred to the goddess of fire and volcanoes was ‘ōhi‘a lehua.

Pele is said to be found everywhere that fire comes up through the earth to light the sky. Wherever the ground is hot and steam hisses up from cracks in the earth, wherever the incandescent glow of molten rock and the smell of sulfur fill the air, and wherever lava erupts in fiery fountains into the sky, “...‘ae aia la ‘o Pele”—“...there is Pele.”

The Bali House and Cottage at Kehena beach HI LLC is registered trademark and  is protected and all is contents, images are protected under Federal and State of Hawaii law by US. Any use of it's contents and images is strictly prohibited.